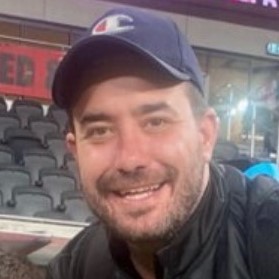 My first re collections was when my dad used to drive me at the age of 6 to Barton Park, Rockdale, where I was playing my junior years with the Rockdale Illenden Football Club.

I was a young apprentice in the first-grade squad, and did not really get much of a look in. I was influenced by Billy McColl to stop playing and focus on my coaching. After nearly 15 years of playing, I realised I received much more joy and satisfaction by helping other kids reach their dreams.

Without a doubt, winning 3 consecutive Grand finals in the U20s Men’s League with Sutherland Sharks, before being promoted to the First-Grade coaching position.

I have been Technical Director for South-West Wanderers Football Club for the past 11 seasons. South-West Wanderers is a community-based grassroots Football club that promises to provide high level coaching in a nurturing environment. We coach two nights per week, and we develop players from the ages of U5s to U12s.

Mentors are very important. I would not be here today if it wasn’t for the influence by Apia Tigers Legend Billy McColl. Billy is that one person in my life,  I can pick up the phone and just have a chat too . Billy is still a long-life mentor both on and off the park for me.

I hope to one day coach in the Australian A-League structure.

Dylan Fox who is now playing in India, formerly with the Central Coast Mariners and Wellington Phoenix. Moodie Najjar, currently on loan from Melbourne City with Macarthur Bulls. Marc Warren, who formally played for Sydney FC, and Perth Glory.

Winners Never Give Up and Give Ups Never Win.

Always be positive and love the game.

Choose a club with the right environment to play.