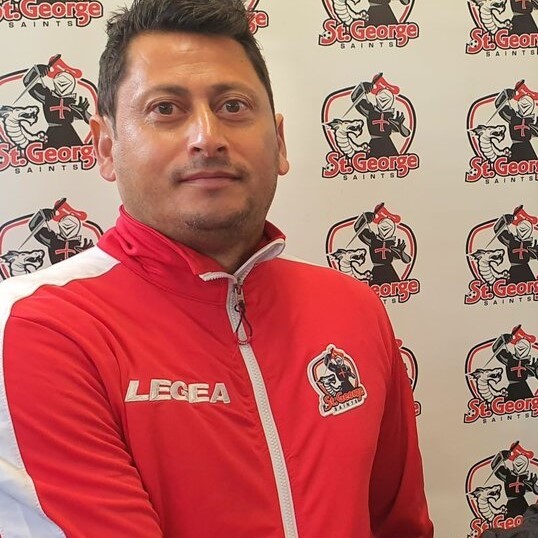 Thank you for thinking of me and allowing me to be a part of this fantastic initiative you have put together.

I was born in 1972 at Royal Northshore Hospital but moved to Wakeley in Sydney’s South-West when I was 5 years old. My Parents are both originally from Mauritius. I attended Fairfield West Public School and later attended high school at Freeman Catholic College. I am currently living at Harrington Park near Camden and work as a sales representative in the animal health industry.

Growing up in Wakeley right in the middle of such a strong football heartland it was near impossible not to be involved in football. I first remember playing at school I’d get to school early for a kick and recess and lunch was best part of school because I had so much fun playing football with my mates. Then I’d get home and play football on the street until the sun would go down, great times and great memories.

I started playing Club football when I was 8 years old my first club being Fairfield West and finished when I was 34 Years old at Blacktown Spartans. I made two NSL appearances for Marconi in the NSL and represented NSW Numerous times at youth and senior level. I also represented Australia U/17 (Joey’s) At the 1987 World Youth Cup in Aberdeen Scotland and was also part of the squad for the Australian U/20 ( Young Socceroos) World Cup qualifier games against Israel home and away.

I first got into coaching when I was 23 years old at Marconi U/13’s. Coaching wasn’t something I really thought about back then as I was still playing. I spent 10 years as a player at Marconi and in that time made a lot of friends and one of those friends needed a favour so I got involved and loved it.

My Greatest personal achievement has been the opportunity to coach first grade at two historic and successful clubs in Australian Football in Marconi and St George FC. I have also taken great pride and joy working with the players I have coached over the years hopefully having a positive impact on their football journey.

Football is full on, its very time consuming. Luckily, I am blessed with an understanding and supportive family. A week consists of training 3 times a week and game on weekend. There are also coaches meetings, board meetings, player meetings, watching games live, watching  video, preparing sessions and endless phones calls .

I have been fortunate to have been coached and worked with some amazing people and exceptional coaches that each had their own strengths and weaknesses from which I have learnt from and implemented in my own coaching journey. Some of these coaches were Berti Mariani , Ken Schembri, Ian Lloyd ,Oscar Gonzales, and  Vic Dalgleish.

I am constantly learning and striving to be better by watching ,listening and asking questions from SAP coaches all the way through to First Grade coaches.

In the future I just want to have the desire to continue learning and improving so I can continue to be involved in coaching and to be honest with my self-assessment and be brave enough to make changes in the way I go about man coaching.

The three players I played with that stood out were Paul Okon, Steve Corica and Mark Schwarzer. All were extremely gifted and blessed with natural ability, but it was their discipline, desire, work ethic and belief that set them apart.

Players I have coached that were standouts were Marko Jesic, Sean Rooney, Mirjan Pavlovic, Ante Tomic and Lawrence Hanna. All top blokes, all class on and off the pitch and all match winners – that is why they stood out for me.

Don’t chase the dream, live the dream in every minute of every training session and every game.