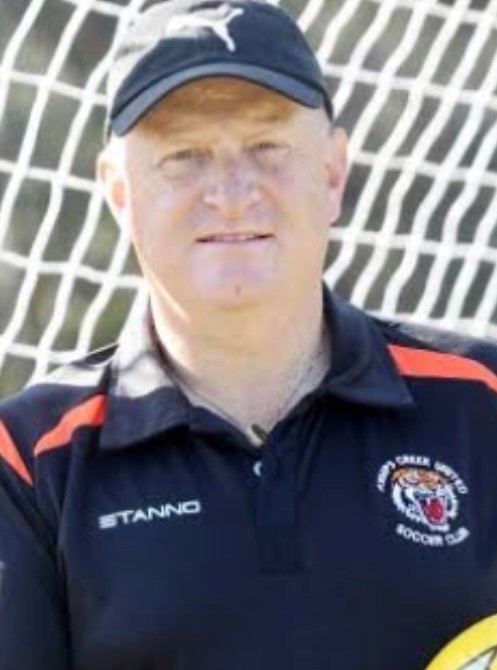 I was born in Dubbo in the late 1960’s to parents who hailed from a remote rural town of Ivanhoe. Most of our holidays were spent helping on the farm with maintenance and stock work. I attended Dubbo South High School and graduated Year 12 1985.

At age 20 I moved to Bathurst to continue my career in Local Government but at age 24 I was fortunate enough to be accepted into CSU-Bathurst to study a Bachelor of Applied Science (Industrial Mathematics & Computing). Completed this degree with a major in Operations Research and a minor in Recreation and enrolled immediately in a Graduate Diploma of Education (Mathematics & Computing).

In 1998, at age 30 I moved from Bathurst to join up with Tony Walmsley (former CCM’s coach) in Bundaberg to start a football program at Bundaberg North State High School.

In 1999, I moved to Sydney to join up with former team mate and fellow university student Trevor Morgan at Westfields Sports High School with the main objective to grow the girl’s program. After spending three years at WSHS an opportunity to work fulltime with the doyen of youth football development, Mr. David Lee.

2002 resulted in an exponential growth in my football education. The exposure to David Lee’s football pedagogy outweighs anything on the internet or in coaching books; Mr. Lee was a person ahead of his time. The NSW-based Golden Generation players are testament to this.

In 2003 David pushed me to explore and develop my own philosophy and a window of opportunity opened up at Bossley Park High School. A solid platform existed at BPHS with Davide Foti, Joe Agostino and Fortunato Foti running after school programs for students.

However, we wanted to engage and value-add to student’s football education in a greater way then what currently existed. So, in 2006 our first Year 7 class of students were selected based on a formal application and trial process. In 2008 these students commenced Year 9 and were the inaugural group to engage in football as an elective subject. The subject allowed students to gain an insight into other aspects of football outside of playing such as coaching, refereeing, sports administration, event management, sports science, sports media and sports medicine. Thus providing a holistic approach to football education as well as allowing student athletes to pursue more options for a career in football as opposed to just being a player.

In 2009 football became available to Year 8 students and our first Year 12 class graduated in 2012. The benefit of the Talented Football Program is that the students partake in theory and practical classes within the timetabled day; the class is not held early morning or late afternoon.

So this former math’s teacher has been at Bossley Park HS from 2003 to now; 19 years.

Football was not the Stanmore family’s choice of sport. Our father and Uncle’s all played rugby league and cricket. Our mother played tennis and cricket. But our Mum was not having her son’s play rugby league until they were older. So it was U6 Dubbo RSL Tigers as a 5 year old with Mr. Grady before moving onto Newtown Soccer Club as a 1st grade as a U14 player under Mr. Crowe. Writing this I find interesting as players today can tell you their coach’s first name but hardly ever their last. Perhaps there is something in that; respect v personable approaches to coaching?

School football is an important part of a youth footballer’s development. They get to play with teachers as coaches who have a strict code of conduct. This equates to an environment that is conducive of positivity and security for the youth player. At schoolboy level I was fortunate to represent Western Region in 1983 – 1985 at the NSW CHS Regional Carnival at Marconi (1983), Ashley Brown Reserve/Gabbi Stadium (1984) and Cromer Park (1985). At the 1985 carnival I was selected as a shadow reserve to the NSW CHS 1’s squad; there was no NSW CHS 2’s squads in those days. I met and was coached by teachers who would in 1996 become piers/mentors in Ron Pratt, Chris James and Greg Best.

In 1991 I took a year off to concentrate on being a first-year university student and was able to gain selection into the Australian University squad alongside fellow team mates Trevor Morgan and Paul Ivers.

In 1983, as a 16-year-old my parents volunteered me to coach the U8 Dubbo & District representative team. The team played against Lithgow, Bathurst, Orange and Wellington representative teams. We didn’t start very well but we won the grand final.

In 1991, I helped out with the CSU-Bathurst 1st grade women’s team. I had no real idea of what I was doing. I watched Morgan and Ivers undertake coaching courses and in 1994 with their assistance a Level 2 course was undertaken and completed.

In 1995, with the assistance of the Bathurst Association, we started Bathurst City Women’s team that played in the NSW State League Division 2 competition. We also started the inaugural year of the Mitchell Cup and Mitchell Shield as a way to fund the team making it a cost-neutral exercise to play.

Over the next three years Bathurst City won two premierships, played in three finals series, won a grand final and were knocked out at semi-final stage in 1997 by the Northern NSW Institute squad in extra-time after being up 3-1; a game I’d like to have played against the Mark Jones coached side again and done differently in the last 10 minutes.

Football has been good to me for many years. Met some great people, many who remain close friends. Have been lucky to have played roles in the development of many players and coaches and hopefully have made a difference in their lives and performances.

Australian School Girls in 2008 (Japan/South Korea) and 2010 China/UK/Ireland), AIS Scholarship coach, five NSW All Schools Titles with the NSW CHS 2’s, NSWIS Assistant Coach, working with the USA National U23 Men’s team at the Sydney 2000 Olympics and playing a major role in building the BPHS TFP to where it is today.

Bossley Park HS is Monday – Friday which involves 12 practical and 3 theoretical TFP classes per week plus an extra girl’s only session on Friday mornings. Throw in the day-day administration duties and the individual pastoral care we give to the students and the week day is fairly full.

Monday nights it’s over to Valentine Sports Park with the FNSW TSP U14 or U15 Sydney South squads where we play competitive games in a very educational, player-centered environment.

Tuesday, Wednesday, Thursday and Friday its off to Kemps Creek where we have introduced an experimental coach education program in 2021. With the support of Club President Ross Maiorana, Club Technical Director Sonny Makko and the committee, we have engaged eight former BPHS TFP students to coach in the U5 – U10 age brackets. My role is to mentor these lads whose ages range from 18 – 31. We have set up an environment that is extremely conducive for all stakeholders to maximize their football education as a development program is a tri-partisan process involving player, parent, and coach.

Saturday’s is on the road to watch NPL games, as many U5 – U10 games as possible and to coach the U16 Kemps Creek United boys’ team.

Sunday’s is an early rise to head out to watch our daughter play in her first season with SD Raiders which is a unique experience as the head coach is a former student and ex-player in Catherine Cannuli.

Sunday afternoon’s starts the planning process for the week.

My main role model was Mr. David Lee and Joe Judge (Bathurst 75). However, as players do, one grows through observing others and taking an ingredient from here and there. Main contributors as a young coach were Norm Boardman, Richard Evans, Bruce Wallace and Kelly Cross. I admire the methodologies of Sir Alex Ferguson, Phil Jackson, Wayne Bennett and Clive Charles.

But my main go to person that I have the utmost respect for and can sit and openly and forthrightly discuss football is former Matilda Leigh Wardell.

My biggest supporters are my family; Karen, Nathan, Tyler and Mia.

To keep improving myself as a coach to maximize the ability to make a difference with junior and youth players. Perhaps be involved at a higher level outside the school football environment but time is a limiting factor.

The teams and programs that I have been involved with has allowed for many players to have shared a path at some time be it short or long.

However, it is my belief that I can never stand next to a player and state that I developed that player; that’s not my mantra. Players make players; coaches are the facilitators of learning and parents provide a sound and supportive home life.

Some memorable players that I’ve shared a football journey with include:

Ellyse Perry – 2011 World Cup v Sweden goal with her non-dominant foot from outside the corner of the penalty area. Proud moment.

Emily van Egmond – convincing her parents, Gary and Annette, to allow Emily to attend the School Sport Australia U19 National Championships in 2006 in Canberra to represent a young NSW Invitational squad at just 13 years of age. I promised that I would never place a player in a position where by they would have a negative experience or be harmed. Emily relished the challenge and was one of our better players.

Kyah and Gema Simon were also in that team as well as Ellyse Perry who was taken up to the NSW All Schools team after a withdrawal. The one that got away in that squad was Sally Fitzgibbons, but I guess being ranked as World Number 1 Surfer in 2019 is not a bad achievement. The team lost a close Grand Final to NSW All Schools squad after topping our pool defeating Queensland and the ACT on the way to the final.

Jessica Coates – inaugural intake to the BPHS TFP. Scholarship to Nicholls State University in Louisiana where she gained All American. Now plays in Bulgaria where her team has qualified for the 2021/2022 UEFA Champions League.

Catherine Cannuli – promoted Catherine in 2000 to play 1st Grade at Marconi in the NSW Womens State League Division 1 competition. Playing alongside Joey Peters, Joey Burgess and Alicia Cavanagh, Catherine was Awarded the Golden Boot. Took a lot of heat for that decision but I will always have the attitude that if you’re good enough you’re old enough.

Without offending any male players, some more notable include:

Liam Rose – BPHS and also selected him to play in the NSW CHS 2’s squad that won the NSW All School’s competition.

Alex Jovanovic – epitome of a player who just kept working hard and knocking on doors. Etched out a great career spanning South Korea, China and Australia.

Train and play like someone is watching as one day someone will be watching and if you are not on your game then an opportunity has been wasted.

Somewhere else in the world someone is training harder than you and when they come up against you they will either defeat you or beat you for a position.

And one for the parents:

Don’t ever tell me how passionate your child is about football. Passion is an emotion that doesn’t get your butt off the couch to go train. Desire is what provides the drive to be successful. So, leave passion on the lounge and sacrifice your time for desire and they will improve their football so that they will then as a consequence of improvement, enjoy their game more.