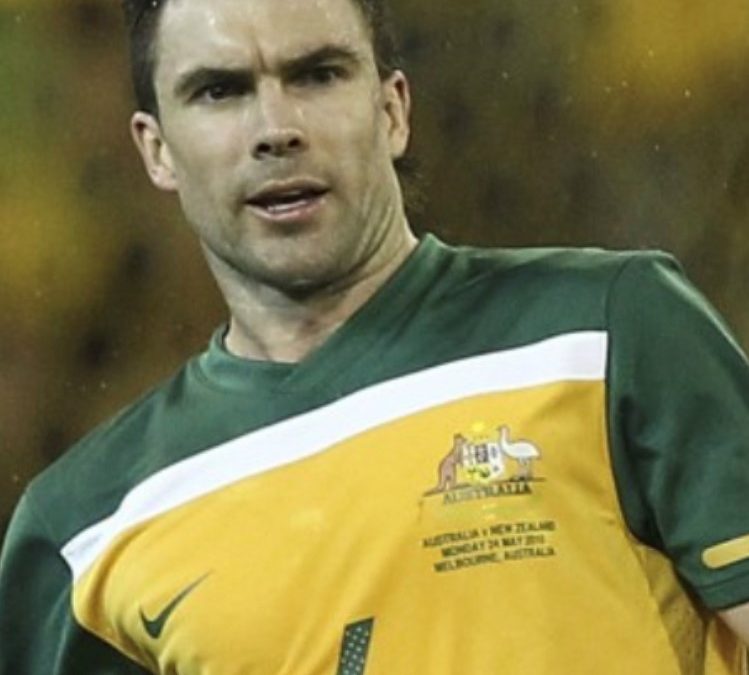 I grew up in Wakeley, with my family of Mum, Dad, older sister, and younger brother.

My first recollection of watching a football match was when I use to go down to watch my dad play park football for Chester Hill, waiting for the half time shots with 50 other kids, which fed into myself playing for local clubs Canley Heights Cobras and Wetherill Park Westerners before making my move across to Southern Districts, where I played from U/11s through to U/16s before moving to Marconi Colts and Marconi Reserves.

I made my debut for Marconi Stallions back in 2000 in the NSL, the last game of the season V Brisbane Strikers. Then played a few more seasons in the NSL with Marconi and Parramatta Power before that all wrapped up, and the National Football League became the A-League, where I played the inaugural season with Central Coast Mariners before moving to the Bundesliga with FC Nurnberg. I then had stints in Denmark with Aalborg, UAE Al Jazira, back to OZ, Thailand and finished back in the NPL with Bankstown and where it all started at Marconi where I decided to retire in 2018.

Due to lack of game time, change of coach, injury or short contracts, I had to move around to different clubs like a few other footballers’ journeys at the top level. In saying that, some moves allowed me to play at the highest level, making appearances for the Socceroo’s, World Cups, Asia Cup, German Pokal Cup, Champions League, Uefa Cup, and Asian Champions League, as well as a few Grand Final appearances here in OZ.

(I’m definitely not pumping myself up with writing that, and I actually feel uneasy writing that stuff, but that was all part of my journey). Sometimes it’s easier to look at what the game of football didn’t give me and put me through mentally and physically, but looking at that, there isn’t too much I haven’t been a part of in some way or another of what football offers.

Training itself was very physical, the football field was an avenue to take out any anger/frustration from the day of work. There were plenty of hard challenges back in the Marconi days of Mark Babic, Dom Luongo, Brendan Renaud; all who never pulled out of a challenge and showed me some of the defender’s mentality needed at the next level.

When I went to full time training with Parra Power then into the A-League and overseas, we would generally have 1 day off in the week, and that day would change depending on when we played. If we had cup games, we would normally not have a day off but rather a more recovery based/light session.

A normal week could cover anything from small-sided games, mini world cups, physical runs, possession games, football tennis (proper nets and marked lines in Germany), forest bike rides, pool sessions, yoga, gym sessions, formation work for and against, crossing shooting, almost all bases were covered. Like I said, if we had more then 1 game in a week, we would be focused more on recovery than physical sessions.

The most underrated session in today’s game I feel, is the team bonding sessions (within reason), as I have played in a few teams where we were on a losing streak, decided to have a team night out, (and it could be a day at the races or skirmish, just somewhere the players get to see each other in a different light) and things turned around within a week or so and went on a winning streak. Different people have different ideas about this, especially the science-based data coaches, but for me, when an individual and team mentality is thriving as one, they are hard to stop.

I got into coaching when I received a phone call from Dean Heffernan to help assist him at the Wanderers U/20s in the NPL2. Coaching wasn’t something I always thought about. I loved to help players, more so with being constructive in what information I would give, and more often than not, being positive in most cases and giving them my own personal experiences in whatever moment came up to help them develop. From there I was asked by Dean again to help him assist in the W-League with the Wanderers along with Catherine Cannuli.

My greatest personal achievements would have to be playing for the National Team and making a couple of World Cups, knowing what I had to deal with through football setbacks at club level, as well as knowing that I helped a few players along the way achieve their own goals and push through what they were dealing with.

Coaching wise, I have only ever had an assistant role so far, but I enjoyed seeing some of our players in the NPL move up to contracted WSW 1st team players. Although I would have played a minimal part in their achievement, I would hope I gave them some inspiration along our time together, and with the Wanderers W-League side, helping them achieve some of the best results the club has seen across their time in the W-League and help some of the girls develop as players and professionals.

Scoring for Australia in the 2007 Asia Cup was a highlight, as well as scoring in a derby WSW V Sydney FC at Alliance in front of our fans. I have also unfortunately scored an own goal on the National stage for Australia V Paraguay in a game where a lot of the golden era were retiring. Popovic had just scored, I was then subbed on for him and within a minute or 2 I scored an own goal to make the game end 1-1. In front of a packed Suncorp Stadium in QLD, this was another testing moment after being hammered in the papers, but I was lucky enough to have a coach in Graham Arnold to back me for the qualifier we had within a week for the National team in Sydney, him giving me the opportunity and the players in that team the following week helped me move forward.

At the end of the W-League season I had to let Dean know I was deciding to step away from coaching for a while to focus on my family and try and start another career away from football.

I really like Ryan Giggs and the way he ran at defenders, and I liked Paul Scholes and his distribution, me running at defenders I felt I could do at a good standard, but the scholes delivery not so much. Hahaha.

Coaching wise, I have really admired the way Jurgen Klopp is with his players and staff, as well as his knowledge of the game. Philosophy wise, I think as a coach you can always pick bits and pieces from coaches but ultimately you need to have a philosophy you believe in, whatever that philosophy may be.

No, I’ve decided to step away from coaching at a high level at the moment, but I may put my hand up for my daughter’s team next season as her coach has had to move to the country for work. I will see how it all goes, as I can always assist if another parent wants to put their hand up.

I’ve been lucky enough to play with some great players over the years, whether it be technical ability or leadership ability. I think the things that set them apart most of the time from what I seen, was that when they crossed the white line they were on, you could see they just enjoyed being out on the field, the challenge of the game, and didn’t care if they made a mistake, they just got on with it all.

If I could go back, I would try harder to not overthink situations and put so much pressure on myself. I remember some of the best games I played were when I acknowledged I was playing a game I have been playing since I was 4 and a half years old, and the challenge was against the other team not myself.

Everyone is going to have a different opinion. Although the game has changed a bit, being more of a technical game rather than just position specific, meaning defenders are just the big tough guys at the back and the midfield/strikers are the technical players. Across the board now, every player from the Goalkeeper to the Striker need to have good feet technically, but there needs to be an acknowledgment that mental health is of a major importance due to the social media aspects of the game nowadays.

Almost everyone has a social media account, and anyone can write anything without a face being put to the comments. Also, as professional players, there should be and is slowly becoming, more of an importance on being ready for post football as I would have to say majority of football players here in Oz plus some who have played overseas, me included, will have to work post career to pay bills.

I think it’s just that the game has changed in a sense where everything even under the FFA philosophy should at most times, be played out from the back, so the game is as open and free as it used to be. Probably not as a lot of the time now the ball isn’t just being smashed up and back, its more about possession in good positions and moving forward. I think as a coach, although here in Australia they want you to play to a certain philosophy at certain ages, you still need to allow for players to make their own decisions as footballers, because when you are on the ball, you see different things and feel different things, to someone who is sitting on the bench or in the stands.

Exactly that, chase your dreams, whatever that may be. Whether it be for playing in the NPL, A-League, overseas, National Teams, Trophies, Money, whatever the motivation and football goals are, give it everything.

You will have to make sacrifices, there will be times when you don’t get to go out, when you don’t get to go to family gatherings, you might miss weddings and birthdays, just enjoy the challenge, and have no regrets or excuses. The game is always going to have opinions, the opinions of coaches, supporters, the media, just take in what you need and block out the rest. Life really does go by quickly, even quicker in a professional Football environment, so enjoy it. Push through the hard times, which I can almost guarantee you will have at some stage in your career. Create some great memories that will stay with you forever.