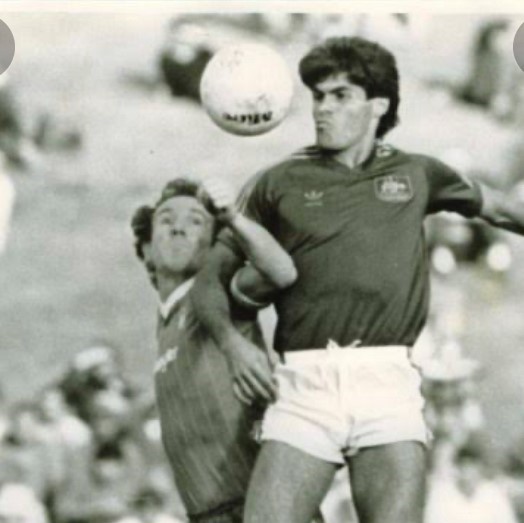 Rarely we hear commentators say the great players “Can make the ball SING “.

In the 80’s, Australia had such a player who could not only make the ball sing, but also play the role of the Conductor of the Orchestra (dictated the tempo of the game) and chose the music (what type of football was being played).

A former teammate said The Kat didn’t give you a pass, he gave you a gift.

Born in Greece , raised in Athens came to Australia 9 years old, played junior football with canterbury soccer association. It was the hardest situation I had been in because I did not speak the language and we had to struggle because my parents came here with two suitcases and nothing else. Growing up, I had to deal with ‘wog’ remarks everywhere for many years. It was a tough period.

I fell in love with football from an early age and never looked for anything else , that was my passion. I got hooked on the game back in Athens when I used to play in the back streets on dirt fields. For me when I came to Australia it was a continuation of my love affair with the game and I used up every opportunity to play soccer at school and at playgrounds.

I played professional football in Australia with the following clubs starting in 1977 with canterbury, then St George, Olympic, Apia, Marconi, Melita, played in Greece with Larissa  and 25 times for the Socceroo’s.

I played for Olympic in my younger years which were very satisfying. I was voted Australia’s best player and league player of the year in 1982. It was a special period for me also because I got picked to play for the Socceroos.

I went into coaching cause I could not play competitive football like I used to due to age, the only reason to stay involved in the game we love.

My personal achievement was proving to myself the level of footballer I became. An example of justifying that was the Socceroos v England game in 1983  at the Sydney Cricket Ground.

I was voted man of the match, being voted footballer of the year in 1982, and winning 3 championship medals with Apia, Marconi and 2 NSL cups with Sydney Olympic. I  also coached St George, Apia in senior football.

At APIA under Rasic, we went through a long period of undefeated games. We had an incredible side including Tony Pezzano, Charlie Yankos, Alex Bundalo and Arno Bertogna. We really were unbeatable that year.

The two league titles with Marconi under coach Berti Mariani also represented a fantastic period in my career. Again, I played with some great players like Bobby Catlin, Tony Henderson, Zlatko Nastevski and Frank Farina. It was never a case of whether we would win a game but rather by how many goals.

South American footballers inspired me, the touch and skill on the ball. This is what I practiced and the footballer I became  creative, skill full, with exceptional technique.

Marconi’s Nastevski is up there with the very best I’ve played with. His football intelligence was amazing and the way he finished was sublime. We read each other’s mind incredibly well. Olympics’ Marshall Soper too was an amazing player. He could score goals from anywhere.

Defender Alan Davidson and playmakers Zarko Odzakov and Oscar Crino were probably the finest players I came up against.

In terms of coaching players, I have played my part with Terry Antonis, Panos Armenakas , Dimi Petratos, Marco Tilio, Jerry Skotadis, Kosta Krozos. They all have passion, football technique  and potential to be great footballers

Creativity , skill, and technique  freedom to play no robots

If they produced more skilful technical players with the ability to beat the first man in the top 15 in the world. We have incredible talent, but it’s not nurtured and not polished and refined unfortunately.

I scored a hat-trick for Olympic against APIA at Lambert Park in a 3-0 win in 1982 and the first goal was something I will never forget. It was a half-volley that went into the top right-hand corner. My most important goal would have to be a penalty in a shootout in the 1988 grand final between Marconi and Sydney Croatia. The guy before me had just missed so the pressure was on me to convert, which I did.

Believe in yourself , train the house down and listen to the  right people.