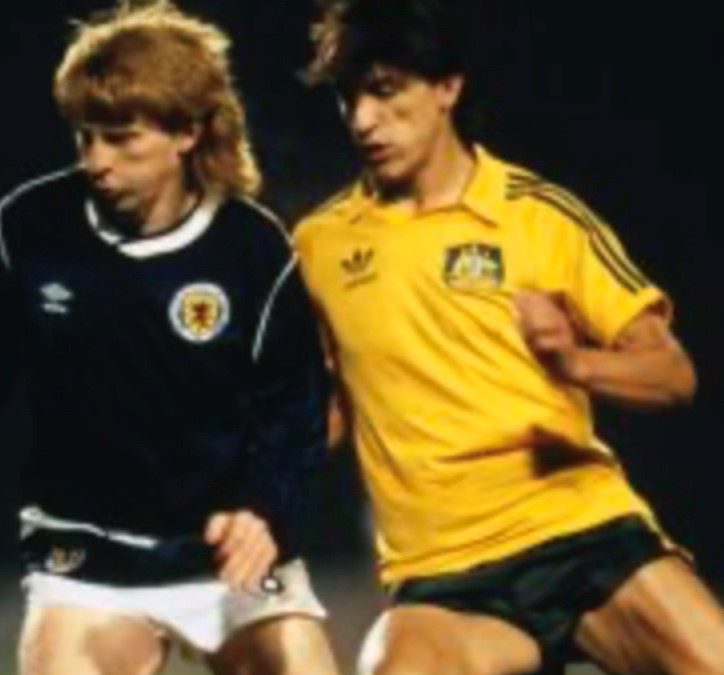 Legend has it that a little boy found an old, battered ball at the local park and picked it up all scratched and broken. The boy looked at it, wondered and said ” gees you’re torn and busted ,you look so sad ,I wonder were you ever happy ? To his surprise the ball replied, ” yes I was happy once a long time ago “,When was that asked the boy?, The ball smiled and said ,when I was at the feet of Oscar Crino.

I was born in Argentina. My father was Italian, and my mother was  Argentinian.

I came to Australia at the age of 10 and spent my early years playing soccer  for San Lorenzo  first division juniors.

I started from an early age playing with my dad in his butcher shop using his meat hanging rails as goals then playing on the streets daily before scouts offered me a trial in San Lorenzo. When I came to Australia, I was picked up by my mentor Peppi Dugina whilst playing on Elwood Beach with some former Just ex senior players.

I played for juniors for JUST, Juventus. I then went to the AIS  in Canberra then played seniors for Tung Sing in Hong Kong, Anorthosis in Cyprus , South Melbourne, J.U.S.T and Preston in the NSL.

I also represented the  Australian School boys ,Youth world cup in 1981 in Australia and also played at the  indoor World cup in Holland. I played 37 Senior games for the Socceroos. Playing at  the Seoul Olympics was a career highlight.

As a kid at school, I would play every day at lunchtime or playtime and at home in my back yard with my brothers or sisters, then train with my clubs at least twice a week catching a 45-minute train ride after school. In my senior years the training increased to 5 days a week.

Back in those days the training offered by most clubs was physical with the exception of my mentor who concentrated more on the technical.

Winning the NSL Championship with STH Melbourne and playing at the Seoul Olympics against the likes of Brazil and the then Yugoslavia.

After I had to prematurely retire because i was diagnosed with irreversable ostio arthritis on my right knee, I was asked by some struggling clubs to try to rescue them from relegation. I took these offers as a learning short term late season challenge with the knowledge of the difficulty of the task. It was otherwise very satisfying improving individuals that had not had previous football guidance, and still today some of those players express their gratitude for the knowledge I passed on.

I guess for me, my greatest achievement was always about trying to improve and/or make players love the sport they took up, because when they endorsed this, they catapulted themselves to another level . Winning an under 18 championship was satisfying but seeing some of those boys go on to achieve senior and other higher representation was even more special.

I have had a lot of good players as team-mates at club and national level. Branko Buljevic, Steve Woodin, Peter Raskopoulos, Marshall Super, Chris Kalantzis and Jimmy Patikas were all fantastic athletes. So were goalkeepers Jeff Over and Terry Greedy.

My idol  coach was my dad, and Peppi Dugina as he was the unsung hero of The JUST junior set up that helped many players transition into senior representation.

I respected all my coaches from juniors to seniors, as they all had different inputs in my development but most iinfluential on my success was Frank Arok, as he taught me more levels in and outside of the sport and the implications it would have on my game.

I think I learned something from every coach I had. It’s like your schoolteachers from grade one to grade six and university. They are different, but they all influence you and I gained from all the knowledge they gave me because I listened to each and every one of them.

I was lucky to have a number of renowned coaches such as Les Scheinflug, Frank Arok, Eddie Thomson, Len McKendry, and Dragan Sekularac. They were different and had varying views on football but their passion for the game was infectious.

In the end I became a bit of a soup with all the mixture of knowledge I was lucky to receive. I appreciate what all of them did for me and I respect them equally.

I think the Socceroo’s should continue to keep qualifying to every world cup for years to come, to support the development of all local competitions both senior and junior. Hopefully, with the players having European experience, we can one day challenge the big names of world Football.

I say ‘thankyou’ to anyone who says that, but the reality is that there were a lot of great footballers during my time. Even before I came along, there were a lot of amazing players like those who played in the 1974 World Cup, among them the fantastic Johnny Warren.

I also remember going to watch Footscray and Juventus as a kid growing up in Melbourne. They had some tremendous imports. So, I was just happy to have contributed to the game.

To all the kids that have a dream. keep it, entertain it daily, nurture it, live it in the small games you play, respect your coaches, your teammates, and opponents. Learn from losing rather than seeing it as setback. Enjoy every game like it’s your last, and never let anyone tell you it’s too hard. Be honest, work hard to improve yourself as a player and as a person.