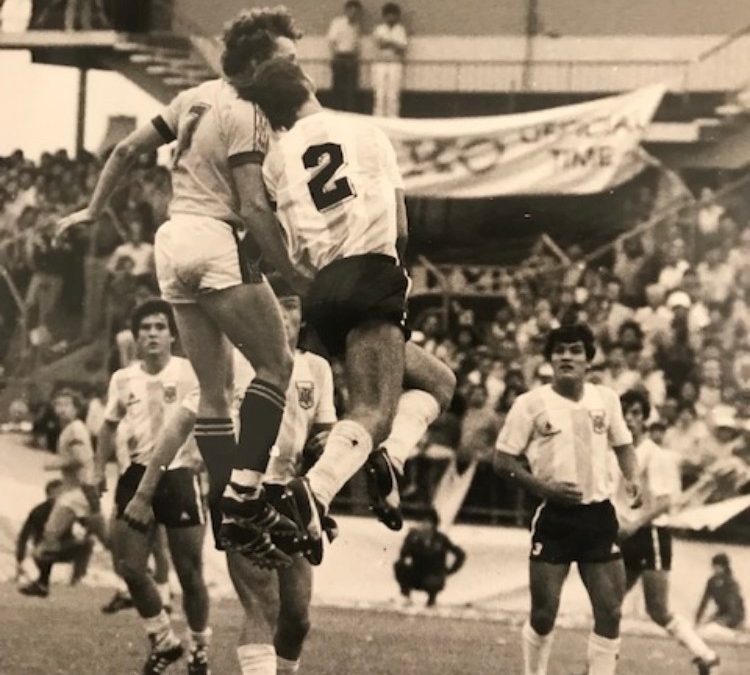 It was the match that showed the world that Australia belonged and paved the way for future victories for the Socceroo’s.

In 1981, Australia played Argentina in their first game of the World Youth Cup held here in Australia. After a dubious penalty was awarded to Argentina, they took the lead 1-0. What happened next is forever etched into Australian Football folklore.

In the 79th minute, tournament Golden boot winner Mark Koussas scored his first goal of the World Cup to bring the Aussies level and give them belief. Then, in the 89th minute, Ian Hunter scored what would be the winning and eternal goal. The goal that all Australian fans would remember, and make sure that the Socceroo’s youth or senior, forever belonged on the world stage.

Grew up in the Lower Blue Mountains which is part of the Nepean District. The district covered an area from Blacktown to I think Katoomba. Obviously, this has all changed due to the population growth of Sydney. It now goes from St Clair to Hazelbrook, then to the Warragamba and Richmond areas. (Colo,Glossodia etc).

I went to Glenbrook Primary, Nepean High School which I finished in 1979.

Played all my junior football in the Nepean district with Blue Mountains and Penrith RSL.

Played in the Nepean Representative teams for my age from I think U/11s or 12/s.

Penrith RSL team had many successful years winning all age level competitions from U10 to U/15s. The team entered and won various competitions, which were open to teams from Sydney and NSW. These games were played across Sydney.

This team also played in 5 Champion of Champion Finals losing 3 and winning 2. The team also only lost 4 or 5 games in that entire period.

Played in the Nepean District state League 1st grade team for three years from U/16 to 18 years of age. This team was very young, and we won three lower State League Titles.

Then went onto Blacktown City in its 1st year in the National League, Then Marconi followed by Penrith City.

Made the NSW team in U/12s and competed in the National Championships to U/19 age group. Ending up winning 4 National titles.

Made the Australian Schoolboys tour of Canada and the west coast of the USA in 1978.

Made the first Australian U/19 team for the 1979 World Youth Championships. We won the Oceania Qualifying Championships but lost to Paraguay and drew with Israel and missed qualification for the Youth Championship in Japan. Argentina won this tournament after a certain Diego Maradonna announced himself to the world. (We had already seen him on TV in South America some months before the tournament.)

Made the Australian Youth Squad for the 1981 World Youth Championship to be played in Australia. Broke my leg in December 1980 while playing the final of the Oceania Tournament in Suva Fiji against New Zealand. Did not start to play again until May 1981 and finally started to play some games with Marconi late June 1981.

Went with the Australian National team to Suva Fiji for a world cup qualifier against Fiji. I was an unused squad player at that time. While in Fiji I picked up a parasite and missed joining the youth team while they finished the World Cup Qualifying games for the senior team.

While the youth team was away, I managed to play some of the final national league games for Marconi and tore a Quad. All these injury/illness challenges meant I was extremely underdone for the 1981 World Youth Tournament. The tournament was to start October 3, 1981.

Married in 1983 had two boys who also went on and played football. Worked in the Advertising arm of print media for Cumberland Newspapers. Left the paper to work in Real Estate and then went back to the Cumberland to continue as a Sales Rep and progressed to a Branch Sales Manager and Finally ended up as Corporate Trainer.

Finally, worked for Fairfax Regional Media as a corporate Sales trainer in the Regional and Rural divisions which involved all of Australia and some of New Zealand.

I first remember playing in what was the youngest age group, the U/7 for Blue Mountains. I was very young and turned 6 that year. I was put in goals for a couple of games and was terrible. I think I had a couple goes in the field of play but did not enjoy what was the two teams in a huddle on a full-size field trying to clear the ball.

Played in the Australian National league for 6 years while also representing Australia at Youth and Senior level.

Tuesday Night with an emphasis on physical work mixed with some ball teamwork.

Wednesday was a little physical work with a lot more ball work, small group drills and Team Tactical play. Most times there was a final game to finish the session.

Friday was a mix of sharp 5 to 8 a side games with some extra details on set pieces and sometimes shooting drills.

Coached my youngest son (Brayden) in the U/8s as no one else was able or willing to coach the team. This progressed to then Coaching Springwood 2nd team in the lower divisions of the State League. Again, it was as a result of my oldest son (Joshua) playing with the team and they did not have a coach.

The following year, I coached the 1st grade for a number of years. During this time, the club set up  their Youth league program. This stopped some years down the track as Football NSW changed criteria and the club was unable to continue at that level.

The greatest personal achievement would be scoring the winning goal against Argentina in the 1981 World youth Cup held in Australia, where we won 2-1. From a coaching perspective, it would be coaching the Springwood 1st team to winning the State league division 2. This led to the team being promoted to Division 1 the following year. This was achieved with a mix of young and more senior local players who did not get any payment at that time.

No. Finished this year (2021) with assisting my youngest son (Brayden) who was coaching Hills UTD U/12 Sap team

I have always tried to take something from everyone and everything I have seen or experienced while involved with the game.For instance, I was coached by my dad, Dennis Adrigan, Raul Blanco, Les Schienflug, Rudi Gutendorf, Mick Jones, Dom Captanovic, Ron Corry, Doug Collins, Mick Hickman and Willie Wallace.

All these people, plus others who I was exposed to like Rale Rasic, David Lee to name a couple all left things with me that I took onboard as a player and then a coach.

Best player I saw was Maradona. However, I believe Pele probably edged Maradona ever so slightly as he was better at handling all the fame that comes with such talent.

While coaching I also integrated some of my Professional working experience managing and training all levels of staff in their work roles.

Would like to acknowledge the 1979/ 1981 Youth Squads and the players in the 1980/81 National team, who I also spent some time with. There were some really great players. There were also many great players who I played against in the National League which makes listing all of them rather difficult.

The thing for me was everyone worked during the day, trained midweek, and then played on weekends. They loved what they did and certainly the game had characters who could also play football.

Like anything in life, they should push to be as high up the list of teams on the world stage.  It would be great if the people, media, and others got their head around the fact that the best world cup to win is the Football World Cup. To win it you have to basically beat the best of all Nations in the World and not a select few or none at all.

Enjoy what you are doing to be the best you can be. The challenges and successes are great things to remember throughout your life.