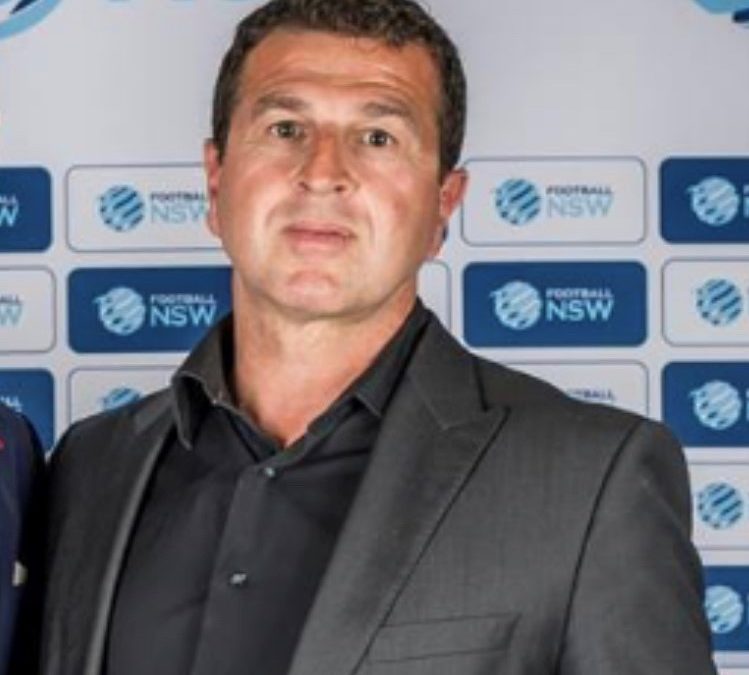 I grew up in Kingsford & Eastlakes NSW.  In between, our family moved to Greece in what was meant to be a permanent move. Played Juniors for Kingsford pre U12s then Sydney City Youth league from U12 – U16

My father was a big influence in me playing the game from a very young age. I remember as a kid and looking at old photos now, nearly all my photos was with a soccer ball at my feet or in my hands. I don’t remember having any other toys like our kids today. Come to think of it, I am pretty sure it was a deliberate tact from my father. I lived and breathed the game, so I would play wherever I could. In the house, in the yard, on the road, at the park. Basically, anywhere I could find.

I played in the old NSL with Marconi Stallions and Sydney United and finished up in year 2001 from memory. Before that I was fortunate enough to spend 3 great years in Greece. Most notably playing in the Greek Top Flight with a team called Panahaiki. It was quite a big club, with a One team / One city aura to it.

Soon after retiring in 2001, I went into the business of Player Management, representing quite a number of Players. Simultaneously I was coaching some junior teams in the St George area. Predominately coaching my sons’ team.  In 2012, I moved to the St George Football club in numerous roles, Technical Director, Head of Football, when, in 2016 the President Ross Gardiner and the Board of Directors asked me to also coach the 1st team.

Probably winning NPL coach of the year with St George FC in my 1st year of coaching. I am also very proud of what I called a successful year of coaching the 1st team at Sutherland Sharks in 2019 with such a young squad. Many of those players moved on at to A League Clubs and overseas during and the end of that season.

Well, I don’t do much coaching at the moment except my role as the Head Coach of Newington College for the last 2 seasons. That is probably more than enough coaching for me hereon. With my current role as the Head of Football, I am basically overseeing the operation of the Football Department known as Marconi Stallions on Behalf of Club Marconi. I have a very good working relationship with our current Head Coach Peter Tsekenis, as well as our Technical Directors and other coaching staff. I am very honored to be given such a role at an organisation like Club Marconi. A prestigious club with such a great history in the Football landscape in this country. The Club is very ambitious and undoubtably are awaiting the long-awaited National 2nd Division where Marconi would be a leading candidate when Football Federation Australia sets the criteria. Exciting times ahead.

Even though I am a proud Manchester United supporter, I have been a big fan of Liverpool FC coach Jurgen Klopp. I have really enjoyed watching his teams play from his days at Borrussia Dortmund. Many years ago, I spent some time with Lucian Favre at FC Zurich in Switzerland and observing his coaching and management methods. He is someone I also admire. I would say that my coaching philosophy would be a blend of both of these individuals.

I am very settled at the moment with the role of Head of Football and not coaching. Working closely with a Head Coach on and off the field within the role, fulfills my ambitions in its entirety.

There is so many to list. I wouldn’t want to leave anyone out locally so I would have to say some of my team mates abroad at Panahaiki. Raymond Ngonko Kalla, Igor Klejch, Illias Savidis, Bosko Mihailovic

Love the game. Don’t ever let anyone tell you are not good enough. Chase your dreams until you find another interest in life which will satisfy you as an individual. Rejection makes you better and stronger. I have people who often tell me that my brother John was a lot better than me, and I agree with them. However, trying to be better than my older brother and other players around me, made me grow into a player and person that gave me an opportunity of making a career from the game that I love.