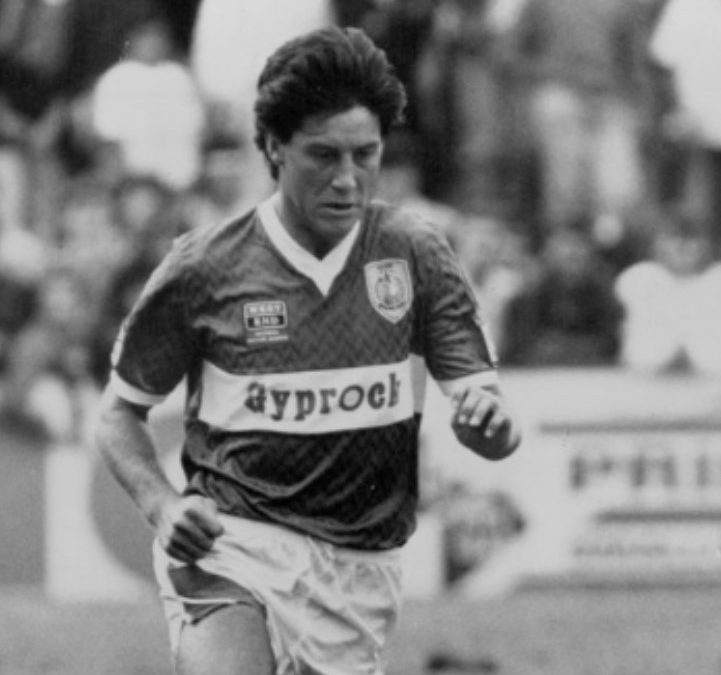 He has 3 boys, Nick, George, and Charlie they all play soccer themselves, and were very talented.

October 1981, was a significant time in the life of former Socceroo, Rob Wheatley, when he burst onto the scene with magnificent performances as an overlapping right fullback in the World Youth Championships on home soil.

He made such a deep impression, he was invited along with midfielder, Paul Kay, to travel back to Charlton Athletic where he stayed for six months before returning to play with Blacktown City in the NSL as a hardened professional.

After a long stint at Marconi in the mid to late 80’s, Wheatley revealed his versatility when he became the form centre back of the NSL at Melita Eagles in the early 90’s.

A successful career in commentary followed before he turned his attention to a business in football and sporting supplies which has grown exponentially.

Wheatley still gains great satisfaction in coaching young players and still believes the game has not reached its full potential.

I reflect back on the days when coaches tried to develop players and if they weren’t the most gifted, they would be put aside and forgotten.

As an educator with physical education qualifications, I believe you must create self-belief and self-esteem for players to improve.

In a session, I enjoyed hard work, technical repetition, and small sided games which kids also respond to.

10-13 years is the golden age of learning and in my private coaching sessions, aligned to my coaching at Shore 2-3 times a week, I see kids are dreaming about making it to the top in football.

Twenty years ago, I made a decision to enter the business of sport, acting as an agent for the Mitre football brand but since then I’ve expanded to many other sporting import activities.

Therefore, I’m on the periphery of the sport with my coaching, business interests and participation on the FFA Tribunal.

In recent years, my two sons have represented Australia in rowing, so the memories of 1981 came flooding back.

I clearly remember sitting on a bus coming from a poor-quality hotel in Pagewood to arrive at the old Sydney Sports Ground with its old wooden seats, receiving an amazing welcoming from the fans. The 35-year reunion we had at the end of 2016 will remain special to me forever.

You played for the Socceroos on nine occasions as a right fullback, but many people would agree you played your best football as a centre back at Melita Eagles from 1991-1993.

It was tough to play regularly for the Socceroos when you had a permanent fixture at right back in Alan Davidson and other established defenders like Yankos, Dunne, Savor and Jennings.

Frank Arok preferred his “mad dogs” like O’Connor, Ratcliffe and Kenny Murphy and that just wasn’t my style so I was overlooked for not being aggressive enough.

After being dumped by Marconi in the early 90’s, Rale Rasic signed me at Melita and convinced me I could play the libero late into my thirties, just as Alex Tobin proved later.

I felt I delivered the goods and was playing my best football, but I didn’t push my case and nobody was pushing it for me.

Also, national team coaches wanted to stick to a system due to limited time in camp and that system just wasn’t me.

From the age of ten when I first played representative football, we were put in camps and trained four or five sessions a day before playing in the afternoon.

Development is about the number of hours you practice technique and 1000 hours was a common target in my formative years e.g. volleying into a net and playing game after game.

Also, young players today are too impatient, and when you look at players like Emerton and Farina, they didn’t rush into European football but received their grounding in Australia.

I was training with a Polish coach recently who said there are three hundred movements in football, but we haven’t even got three and we’re forcing players into roles they’re not capable of.

A few years ago, I visited FC Koln and Utrecht and what they were doing at U/8 level was light years ahead of what we’re doing here.

If you look at the inadequate time, quality, and disloyalty of the current hopefuls it’s in marked contrast with my day where we stuck with coaches like Blanco, Scheinflug and Rasic and did a huge amount of repetition.

We currently are speeding up the process with not enough depth, technique and commitment and we fast track players into the Joeys who I believe are physically immature.

Initially, I enjoyed the role and believed I was growing the game. I was keen to employ former Socceroos to elevate coaching standards and asked if Peter Katholos and Jean- Paul de Marigny could assist on a casual basis for the princely sum of $20 a day but I was informed by management it was too much.

It was all about self-promotion of the management and people who had vested interests in their own districts. I wanted to get on with the game and go to all associations, not just to satisfy these people who were on the Board and only wanted to promote their area.

The same politics applied at the old Australian Soccer Federation where it was never about football, only profile. I was drifting away from the game and looking at other opportunities, like commentating, because boardroom politics never interested me.

I had a very good run, particularly with SBS when Les Murray and John Warren gave me the opportunity and they offered every assistance to ensure I became a professional presenter which led to my long stint at Optus covering the NSL with Paul Wade.

However, when the A- League commenced in 2005, Foxtel had their own people so that put a stop to my career

You have to remember the new, young audience for the A-League is less critical and judgemental and the coverage is also dressed up with the advances in technology.

These new fans don’t regard commentary as important as player performance, unlike when I was involved, we thought the knowledge you imparted from your professional playing career was sought after.

However, former players should be given an opportunity to call matches so viewers and listeners can increase their understanding of the game.

You’d like to think football could be a fulltime career but it’s not that simple in Australia.

I always tried to mix it up with playing, development, coaching and the business of football.

Football may have given me a lot more but I’m happy where I am now after forty-five years in the game since I first kicked a ball as a junior.

I did my C  Licence in 2019 under Robbie Hooker and really enjoyed it.