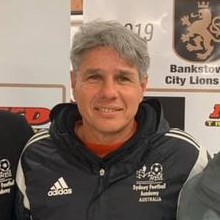 I was born in Montevideo, Uruguay in December 1963. In the family, I have two other Brothers and one sister in which we had a great childhood together. Grew up playing street football and at school on a daily basis. This is where I learned all my close skills, playing on dust grounds, concrete and with older players. Objective was to win and compete in those games however by watching, copying, and trying things without fear was a learning curb. The passion for the game was introduced to me by my father taking us to watch internationals, local games, and sessions whenever possible. From then on, the seed was planted. So, it was a dream from the start to become a football player and play in a stadium during my childhood. In 1974 the whole family migrated to Australia where we resided in Liverpool and Casula area in which we attended Liverpool Boys High School.

I remember enjoying my childhood playing football along with my brother Javier. We were very competitive playing 1v1 on the backyard. When we were introduced to our first Club at the age of five, we wouldn’t miss a session or a game for anything in this world. I used to love and enjoy training and that lasted up to this day.  During my youth which was done here in Sydney, we were inseparable with my brother. We would travel by bus, train or ask for a lift to go to training and our passion was even greater about the game. In 1975 we joined Moorebank SC playing U/13s and being a December born, I was practically playing 2 age groups up. In 1976/77 played with Moorebank on Saturdays and on Sundays I was playing for Southern Districts which it was great as we were 2 games per weekend. From 1975 my dad would always take us to watch Australia play and we knew all the players names. I remember watching in one of those early games Agenor Muniz for Australia who had played in Brazil and then a few years later we were teammates.

In 1978 I went on to play in Marconi U/15s where one of the games was played at the Sydney cricket ground as a curtain raiser to Australia vs Greece with roughly 40 thousand fans. That year I missed out on the NSW U/14s squad (I was on standby) so that became an objective. 1979 I moved on to Auburn FC to play U/16s where I came across as teammates,

Robbie Slater, Paul Carter, Tommy McCulloch and Steve Waugh. In 1980 I moved to Avala (Bonnyrigg White Eagle now) where I played 3 games with 3rd grade and pushed through to first grade with Doug Utjsenovic as a Coach (1974 World Cup player). In the same year I was selected with the NSW U/19s as the youngest member (Joe Vlasists coach) and also selected in the NSW CHS. In 1981 the same scenario plus asked to join the Institute of Sport in Canberra by Jimmy Shoulder (coach) which was the biggest mistake I made by not going. Also selected in a 30-man Australian U/20s squad under Les Scheingflug. Finally getting 2 years in a row sportsman of the year award at Liverpool High School and the State School Blue award for football. 1982 I was on loan to Sydney City where I found it extremely hard to crack in to the first team where there were 9 senior international Socceroos and consistently winning the National League (Eddie Thompsom was the coach).  In which I should have stayed at the Club a year longer. Moved back to Avala, Granville, Bankstown City and St. George. I retired at 30.

I stayed away from Football for about 6 years in which that time I started doing my licenses. I was overseas in 1999 watching a first division session and loved it. That’s when I said to myself that’s what I want to do. So, in 2000 I started coaching U/14s at Bankstown City, in the same year I started at FNSW as a Coerver coach and got asked to be the TD at Bankstown City by the end of the year in a five year plan. The reason why I wanted to coach Youth is because I wanted to show them what I wasn’t shown. If I could help them make decisions from my own mistakes as a player. Guide them, give them little details yet with my discipline and passion.

My personal achievement in football are the memories that I have playing next to excellent players. Through football I’ve met a lot of people that I’m still in touch with.

In coaching, my goal was always to help produce youth players. In 2003 I decided to open my own Academy, also worked for Coerver and FNSW with NSW sides and as a youth licence instructor.  From 2000 to now I’ve been very fortunate to have travelled overseas to continuously get updated in Europe and South America.

A coaching week consists of the planning content of private sessions in the mornings, Academy and Bankstown City sessions in the afternoon. Always referring to term plan and communicating with coaching staff. Also watching weekend games, analysing and coding. Through private sessions and academy is contacting parents and through Bankstown is mainly dealing with physio, strength and conditioning coach and sending clips of sessions on a weekly basis to coaching staff.

For the past 20 years I’ve been lucky to have travelled to different countries due to coaching. Visited a number of clubs and watched or participated in sessions in such Clubs as AC Milan, Bayern Munich, Valencia, Gremio and Inter (Brazil), Boca Juniors (Argentina), Nacional and River (Uruguay) and others.  Watching from their 9s all the way to first team. Communicating with their TDs or coaches about youth development. I always had the attitude to learn and readjust when needed. So, I gathered a lot of info from these Clubs and brought the degree of difficulty depending on age and kept on adding to my philosophy.  So, I always looked up to these Clubs and forever thankful for the time and space they gave me.

I always considered myself a youth coach, focusing on developing however I love competing. I would like one day to be Technical Director of an A League Club. At this stage I’m fully focused and committed to my Academy and Bankstown City FC.

Youth players that went on to represent Australia and that I could have had an input in their youth development path would be, Emily Van Egmond, Greta Kraszula, Gemma Ferris and Chantelle Maniti (Girls).