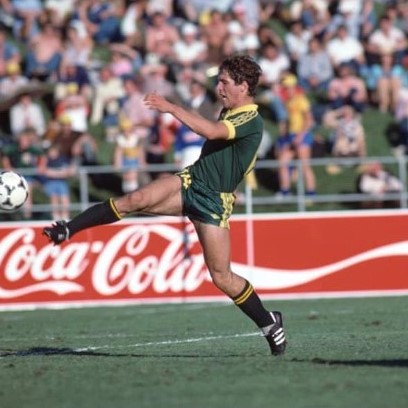 I am of Greek heritage – both parents are from Greece. I have one brother (Alex) who also played for Australia in Futsal. I am married to Faye and have two children, Maree & James. Maree is married to Matt (another soccer player), and they have given me two grandchildren, Aaliyah and Dominic. I was born in 1963 at Balmain (Sydney) and moved to Ryde at around 2 years of age. I have pretty much stayed in the area most of my life.

I remember playing for Ryde RSL at the age of around 5 years of age. Our coach was a local sergeant (Harry Paddock). He used to drive a Holden Kingswood Station Wagon and he would drive around and collect the entire team (13 players) and somehow manage to fit us all in his car along with the balls and other training gear. No such thing as seat belts in those days. I remember scoring lots of goals in those early days. To be fair, we played 11 aside on full size fields in the under 6’s so the goals were huge, and it wasn’t that hard to score a goal if you could kick the ball properly, which I could.

Back in my day, I guess you would call it semi-professional in Australia. Most, if not all players back then, were part time players that had to hold down proper jobs as well. We used to work during the day and then train at night. I played in the National Soccer League with Sydney Olympic and APIA, and I played for Australia at both senior and youth level. At youth level I actually played in a World Cup for Australia and became the first Aussie to ever win a Golden Boot for top scorer in a World Cup. That feat has still not been repeated by an Aussie at either Senior or Under 20’s level. My professional career in the National League came to an end in 1986 when I had a major knee injury (ACL). I had to focus on supporting my family after my knee injury so put all my efforts in work and football took a back seat in my priorities.

In 1981, I played for Australia in the World Youth Championships. This was the only year I focused entirely on playing football, so I did not work or study. My fabulous family supported me through this period. A typical training week was as follows:

We would also train 3 to 4 times a week with Raul Blanco at Marrickville in the morning for one-on-one skills in preparation for the World Cup. This helped me immensely with individual ball skills and confidence.

When I was not playing for Australia, training was three nights a week (as above with Sydney Olympic) after working a normal job during the day.

My greatest achievement is probably not what you expect to hear. In my coaching career I have had the privilege to coach a few players that have gone on to represent Australia, however, that is not it.

One season I was coaching at a local club (that included the two future Australian reps). At the selection trials for this team, 13 players showed up, so I had no choice but to take all 13 players. It is fair to say that two of these players were going to struggle to play in division one against good quality players. As a coach, it was my duty to ensure that all players were given fair opportunity to play and improve. This was very challenging for me, when the range of ability amongst the team was so extreme. In short, we had a great season without winning any trophies. We came second and lost the grand final. However, the best moment of my coaching career came after the grand final when a parent of one of the weaker players came up to me to thank me. I had awarded his son the most improved award for the season. He was legitimately the most improved amongst all members of my team. His father said to me that he wanted to thank me, not for the award given to his son, but the fact that his son transformed from a very insecure person with no confidence at the start of the season, to a confident person walking around with plenty of confidence. His school results had improved, and he was confident around his peers. I still get goose bumps thinking about how I had a positive influence on this boy.

I am a passive supporter these days. I follow Sydney FC and the other Sydney teams in the A-League, and I have a keen interest in our national teams as well as international club football. I am no longer involved in coaching.

I cannot say I had any role models when I was coaching, but I am a hug fan of Angelo Postecoglou and what he achieved in Australia at both club and international level. He has continued with amazing success in Japan and now in Scotland. His football philosophy is something others can certainly learn from.

My coaching days are over now. I am 58 years old and have some health issues that restrict me. I am happy to sit back and enjoy the game from a distance these days. No pressure. Hahaha.

It is really difficult to isolate just a few players. For many various reasons, I have played with, and against some amazing players in my career. Gary Meier at Sydney Olympic was a true clubman. He was playing with Pan Hellenic (Sydney Olympic) when I was old enough to be a ball boy, I then grew up and ended up being a teammate with him, and then when I retired he was still playing at Sydney Olympic for many more years. That is just amazing. Gary also went on to be a General Manager at the club. A true legend.

All my teammates in the Australian Youth Team were brilliant. We were a bunch of underdogs that exceeded all expectations by beating Argentina and drawing against England and Cameroon in a group of death at the world cup. This team was: Glenn Ahearn, Rob Wheatley, Oscar Crino, Steve Blair, Howard Treddenick, Brett Woods, David Skeen, Jim Patikas, Dennis Colusso, Paul Kay, Grant Lee, Peter Raskopoulos, Ian Hunter, David Mitchell, Fabio Incantalupo, John Little and Dennis Ivanac. Without these guys I would never have the Golden Boot.

I believe the current crop of players are showing some real potential. We need to get more players playing regular club football at the top levels around the world. That will brush off on our ability to perform as a team in the World Cup and Asian Cup. We need to continue to improve as we need to keep up with the other Asian nations that are improving year in year out.

Dream big and do everything you can to live your dream. The only thing holding you back is yourself. Believe you can, no matter what others tell you. Apply yourself to the best of your ability, and you will achieve.