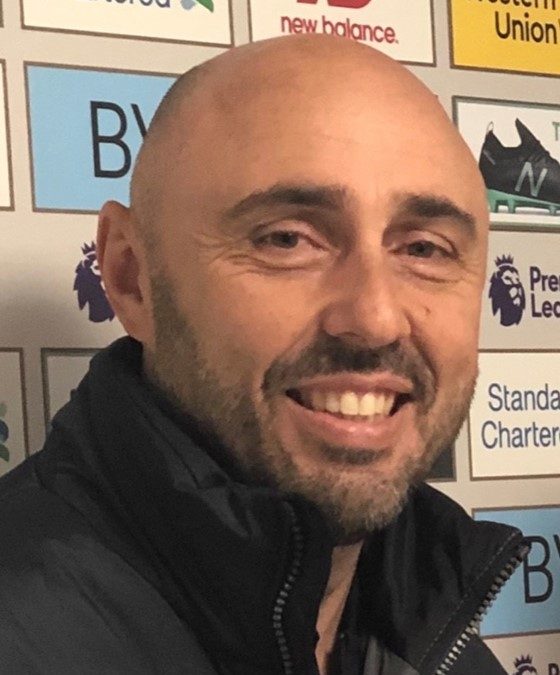 I grew up in Sydney’s south west. With Italian origins, football, food and family came together, not always in that order. We spent most of our time at our cousin’s houses playing backyard sports, in particular football. If we weren’t playing football, we were talking about football. I attended Fairfield West Public School and later went onto attend Westfields Sports High School. I have a Bachelor of Education and have been teaching PDHPE for the last 24 years

2. What are your first recollections of playing football?

I remember spending a lot of time playing backyard football at my cousin’s house. This is where my Aunty bought my first pair of football boots when I was 9, she convinced my dad to let me play. I played for Smithfield Hotspurs up until I was twelve and moved to Marconi where I played most of my youth football.

3. What level of professional football did you manage to achieve and when did you finish?

I played for Marconi in the reserve grade team in the early 90s. I also spent a few years at Mount Pritchard and other clubs in the State and Super League Competitions.

4. When and why did you first get into coaching?

I’m a PE teacher so I was coaching school football teams. In 1999 a parent approached me, letting me know there was a coaching position at Apia with the 15s. I had broken my leg and had stopped playing my own football at that time, so I thought “why not”. I had a meeting with Tony Racicti where he offered me the position to finish the season off.  After that season I joined Marconi under the leadership of JP, where I continued to enjoy working with talented youth players.

5. What has been your greatest personal and coaching achievement in football?

With 20 or more years of coaching, there are many great personal achievements. Amongst winning numerous youth championships and coaching First grade teams, Coaching NSW at the National Youth Championships and Coaching the Australian School Boys have both been a great honor and the highest achievements for me. I thoroughly enjoy being a part in the journey of really talented players, seeing them not only compete but excel at the highest level is really satisfying and rewarding as a coach.

6. As the head coach of the Liverpool Boys High Talented football program and TD of Marconi youth, tell us a little about what a coaching week in the life of Pat Marando entails?

At Liverpool Boys HS, the program gives the boys 4 training sessions on the park and two theory lessons in the classroom. Combine that with board meetings, mentoring coaches, overseeing training sessions 3 days a week with the Marconi youth teams and 5 games on the weekend, I’m pretty exhausted by Sunday.

7. Did you or do you have any coaching role models you look up to or base your coaching philosophy on?

I’ve been lucky to be involved with lots of different coaches throughout my coaching journey. Working with the likes of Jean-Paul de Marigny, Tommy McCulloch and Trevor Morgan early in my career, gave me a greater insight to the level of commitment and discipline that is required to be successful in this profession.  Taking teams overseas and coaching against foreign coaches has been another important factor in my development. Observing and talking to the foreign coaches gives you a better concept of what is necessary in the development of young players and where you are at as a coach yourself.  As a coach of coaches now, I strive to learn more everyday and never stop asking myself and other coaches questions on how we can make thing better.

8. What coaching ambitions do you aspire to achieve in the future?

Coaching Grassroots, SAP, Youth and Senior footballers has been very rewarding in different ways. I’ve enjoyed being involved in all these levels of football and seeing players grow not only into great footballers but fine young men. Currently, I’m working as a Technical Director of Marconi Stallions and it has been a new challenging position that I’m relishing. Having the ownership of a program and being able to implement it at Marconi, which has a history of developing great players, is an honor. So far Marconi Stallions Youth Boys has won selection into next years NPL 1 competition and have had many players being sought after by A League Academy’s which is a credit to the program and all the people involved.

9. You’ve played football with and coached many great players over the years can you tell us some of their names and what set them apart from the others?

During my 23 years of coaching at different levels I’ve had the privilege and honor of coaching many talented footballers. Each of them unique in their styles of play. However, the ones that have gone on to make it, always were a little different from the rest.  If I have to mention one. I was fortunate enough to coach Massimo Luongo with the NSW School Boys and for a short time at Sydney Olympic in the first grade team. He was so mentally tough that nothing his opponents did to unsettle him affected his game. His hustle and mindset set him apart from the rest. Over the last few years coaching the Australian School Boys in the UK Tours and Japan Tours, there have been lots of players that have shown they are able to match it with the overseas players. During these tours it has always been the players with the right mindset and hustle that have progressed. Players like Zac Duncan, Lachlan Wales, Calem Nieuwenhof, Jake Hollman, Mark Natta and Dylan Wenzell-Halls have benefited from being involved in these tours and are now applying their skills in the A League and overseas.

10. Finally what message do you have for all the kids out there who want to chase their footballing dreams?

“It’s not about where you start, its about where you end up” As a footballer you are going to have your ups and downs and again its your mindset that will get you through.